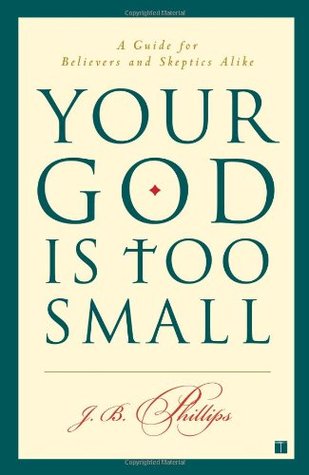 Last year I saw a book by J.B Phillips titled Your God Is Too Small and had to read it as soon as possible. He starts out by addressing the misconceptions of God from people’s lack of understanding or attempts to define Him. Then he shows how big God is, and then what that would look like if he was focused through the lens of a person. I’m looking at two sections in particular, If God Were Focused (1) and (2).

First, go outside and look up. I’ll wait. Take in the expanse of the sky, the night sky in particular. Then look at the life around you; plants, insects, and animals. Consider the complexity of physics and how natural laws work.

You’re looking at the luckiest accident ever, or the handiwork of a creator. If it was created, what does that tell you about the creator? Something immaterial created the material universe, which indicates transcendence and an all-powerful being. The sheer detail needed in the design shows an all-knowing intelligence behind it. The fact that from nothing it decided to create something infers a free will and a personal being.

Is that it? What if it revealed itself to mankind gradually over time, all of it culminating into a personal invasion as a man. What would it be like to meet this person? Take a trip with me and let’s see…

What If God Came To Earth?

You learn about a ‘new celebrity’ and he’s coming to your town. He’s as low-key as the media lets him

be, but he doesn’t have a lot of personal hoopla. In fact, he’ll be in the park, speaking to the crowd.

Parking the car, you carefully make your way through the crowd and end up face-to-face with the guy. You didn’t expect him to be in the crowd, but on a stage or something. As he speaks to the crowd, he seems very idealistic, but you don’t think it would work, these things he says. Not in the real world.

The stabbing pang felt deep inside as your conscience tells you that he’s got a point. Why it bothers you is puzzling you. What isn’t realized is that he wrote the moral law that your conscience is reminding you of. From what you’ve read about him, he does more than speak it; he’s walking his talk.

Now he’s talking about the motives behind performance. You question why you behave the way you do. Fear of getting in trouble or to be well thought of? Or personal pride in what you accomplish? “Do I do things because I care?”, you think to yourself.

He goes on to say the right answer and motive is selfless love to correct the broken world. “Go beyond just loving, just doing good for those in your own little circle,” he boldly speaks over the crowd’s murmuring. What he is wanting is for you to love him and have a relationship with him as God, and from that love also loving his creation, part of which is people. Love of self leads to lack of care for others, and to him every individual means everything.

“Look at what writers idealize most in books, movies, and TV shows. Do you know what they are?” He questions everyone. From the depths of the crowd, someone shouts “a hero!” Another speaks up, yelling “a true love story!”

“A self-sacrificial hero that dies for those he truly loves?” he asks. Continuing, he says that’s what people dream and reach for. It’s the closest reflection of God’s character, he states. Your brow furrows in curiosity as you mull that over. What does he mean by that?

He stops speaking, stands still as kids run by him playing. You look to see if he’s annoyed. Surprised, you see a big smile on his face as he watches them. “Such joy,” you overhear him say, “in the pure innocence of a child.” He has a point, you realize. There is something wonderful about it that even the jadedness of society can’t quench.

This guy is just so good, it’s hard to believe. You notice a political candidate arrive with his entourage. Apparently he wants to be seen with this celebrity that’s captivating the crowd.

He seems to pale in comparison to the speaker. Anything he had done just doesn’t seem to measure up. The candidate pastes on a fake smile for the camera. The pretense is so blatantly obvious.

Creeping closer, you hear him say quietly that the speaker would be a good fit on his team after he wins the election. He promises big things, whatever the guy wants. It sounds too good to be true to you.

The answer he gives the candidate is surprising. “And how does a man benefit if he gains the whole world and loses his soul in the process?”

Is this guy perfect or something? You’re not sure, but he’s authentic and you have to admit he’s living life the way it should be lived. He calls for the crowd to look at the world in a different way, “Are you tired? Worn out? Burned out on religion? Come to me. Get away with me and you’ll recover your life. I’ll show you how to take a real rest. Walk with me and work with me—watch how I do it. Learn the unforced rhythms of grace. I won’t lay anything heavy or ill-fitting on you. Keep company with me and you’ll learn to live freely and lightly.”

Why is he bothering to do that? It appeals to you and the question comes unbidden to your lips before you can stop yourself. He looks at you, walking up to you and calling you by your name.

“I’ll tell you why. I know how the world should be, yet it falls so short of what it could be. It hurts deeply to see people lost, hurting, confused, and wounded by it all. This should not be, it wasn’t meant to be.”

He calls to someone on the edge of the crowd, waving them over. You see a teenager, looking uncomfortable, slightly shake his head and turn away. Glancing at the speaker, you see disappointment and sadness fall upon his face. ‘He’s heartbroken’, you think.

“He’s had a hard life filled with many bad decisions. I’ve tried to help him, but I’m still not getting through. Has that ever happened to you when you tried to help someone?”

You decide to follow this guy, and see where he’s going. On Facebook, he’s mocked and called unrealistic. Some colleges wouldn’t allow him to speak because he made students uncomfortable when he called them to a purer motive. One cable news station would call him an ultra conservative because of his traditional values. Another would call him a liberal because of his bleeding heart. People would try to smear him, fighting against the reformation of worldview that he was calling for.

What would you do if you met someone like that?

What if God was one of us? He became one of us. Jesus is God interacting with humanity and ultimately providing a way to bring us back to him.

What would you do if you met someone like that?