Have you ever seen someone do something and thought “What an idiot.” Or reacted in irritation because some people just don’t seem to get it? Have you ever realized that you’ve done the same thing as the one you’re judging?

Jesus said “Do not judge, or you too will be judged. For in the same way you judge others, you will be judged, and with the measure you use, it will be measured to you.

We focus on the first paragraph, but not the second so much. In that one, Jesus tells us to humble ourselves. I believe it also teaches us empathy. 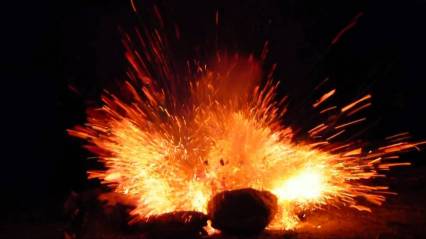 I know a guy that threw gas on a bonfire, and it exploded in his face. He was in ICU for a few days. When I heard about it, I chuckled and thought to myself that he must’ve been drunk.

Then I removed the plank from my eye.

When I was about 18-19 years old, I was camping on the river with a friend. The plan was to fish all night. We were trying to build a fire, but it had rained recently.

All the wood around us was wet. I got a small flame going, but it wasn’t enough, so I grabbed the can of lantern fuel, opened it up…and tossed it on the fire.

The fire climbed the fumes to the open top. I gawked at the flame licking up from the hole.

So I tried to blow it out.

Then I realized it was a flaming can of flammable liquid and that I was an idiot. I tossed it as far as I could before it blew up.

I wasn’t even drunk. I was just stupid.

Years later, reflecting on that, I stopped laughing. Now I feel bad for and empathize with him.

Jesus made me eat humble pie and taught me a lesson in compassion that day.