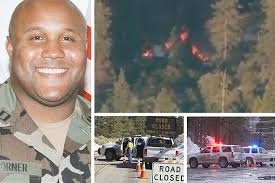 Killer? No denying it.
Just in the actions he took? No
What set him off? Well here’s a link to his alleged manifesto http://www.policymic.com/articles/26194/chris-dorner-manifesto-full-text-read-the-full-christopher-dorner-manifesto where he was fired for blowing the whistle on the jackbooted thugs in the LAPD. And the LAPD went on to prove him right.

In their hunt for Dorner, Torrance, CA police shot two women, Maggie Carranza, 47, and her mother, 71-year-old Emma Hernandez, who were delivering newspaper in their truck. Carranza sustained minor injuries; Hernandez was shot in the back and remains in ICU.

What the hell? This led to a petition to the White House at https://petitions.whitehouse.gov/petition/officially-classify-lapd-domestic-terrorist-organization/Mlxm7YDk?utm_source=wh.gov&utm_medium=shorturl&utm_campaign=shorturlto make the LAPD a terrorist group. I wonder if they’ll be drone struck?

And then they finally cornered him and ‘accidentally’ set the cabin on fire. Really? Listen closely…
http://www.freetalklive.com/content/christopher_dorner_shootout_cops_say_burn_it_down

In my opinion they’re no clean hands here. Dorner was right to blow the whistle, but the minute he killed someone who didn’t do anything to him he just nullified any point he was trying to make.
Thoughts?