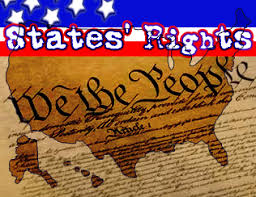 An old friend of mine brought this to my attention. HOUSE BILL 1752 apparently is some congress people growing some guts and realizing the 10th, 9th and 2nd Amendments exist. This should make for interesting committee meetings.

(a) A personal firearm, a firearm accessory, or ammunition that is manufactured commercially or privately in Arkansas and that remains within the borders of Arkansas is not subject to federal law or federal regulation, including registration, under the authority of the United States Congress to regulate interstate commerce, as those items have not traveled in interstate commerce.

So, I better invest in a Nighthawk 1911 since it’s made in Arkansas.

5-73-134. Unlawful enforcement of federal statutes.
(a) An employee of an agency of the State of Arkansas, any public servant of the State of Arkansas, or an agent or employee of the United States Government shall not knowingly enforce or attempt to enforce any act, law, statute, rule, or regulation of the United States Government created or effective on or after January 1, 2013 and relating to a personal firearm, firearm accessory, or ammunition that is owned or manufactured commercially or privately in Arkansas so long as that firearm, accessory, or ammunition is within the borders of Arkansas.
(b) A person who violates this section upon conviction is guilty of a Class A misdemeanor.

I wonder what the punishment for that is?

(2) Require any firearm, magazine, or other firearm accessory to be registered in any manner.

Hmmm, a way around a assault weapon ban? I like, I like. We got to make sure this passes.