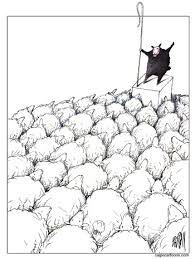 I would say so. Government and organized religion have a similar blueprint they follow.

The Workforce carrying out the leader’s bidding: angels, bureaucrats, military, and law enforcement.

And when people need help or want something they either pray to their god, or complain to a politician.

Also consider the fact that religions have hymns and countries have patriotic songs. Makes you feel good, and bonding with others of like mind in reverence to religion or country.

Or an Oath or Pledge, giving yourself to your god or pledging allegiance to a flag or country.

Then you have the ceremony like religious holidays or Inauguration where people perform for the new or old leader, or holidays where you pay respects to former leaders.

What’s the difference between a shrine and a monument?

Is this a coincidence?