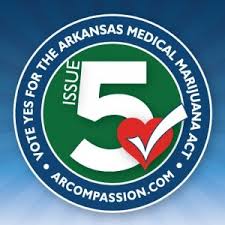 We have an issue in Arkansas to vote for on Election Day. Legalizing Medical Marijuana, and in a Bible Belt state its hotly contested. You can read it all here at the Arkansas Secretary of State’s website.

Though it pays to remember that Sheriff’s are politicians and Police Chief’s are political appointees. The Family Council is a socially conservative Christian organization and Pharmaceutical companies would lose money. Just to see where their principles come from.

In this story here Arkansans For Compassionate Care argue for it.

Now here’s my take: Do you want anyone telling you what to put in your body for any reason. Be it a 16oz Coke ban ala NYC Mayor Bloomberg, salt, etc. You can get fat and that’s bad for your health after all.

Same applies to pot. I don’t partake, I tried it in school, it did nothing for me. Besides I like my brain doing 110mph. But that’s just me. As long as you’re not  physically harming another, it doesn’t matter. And if their’s a chance to  ease someone’s pain, who are you to keep that away from them.

Something to think about.