I found a really disturbing article at the Indiana Star, that you can read here. The 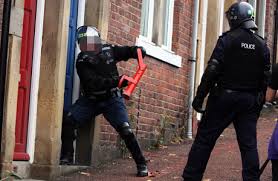 Indiana Supreme Court doesn’t think the 4th Amendment matters,  and police are above the law. First, let me show you the Fourth.

The right of the people to be secure in their persons, houses, papers, and effects, against unreasonable searches and seizures, shall not be violated, and no Warrants shall issue, but upon probable cause, supported by Oath or affirmation, and particularly describing the place to be searched, and the persons or things to be seized.

You and your things cannot be searched, and no warrants issued unless the police have probable cause. The Patriot Act violates this and now so does Indiana. From the story:

The controversial May 12 Supreme Court ruling came in a Vanderburgh County case in which a man who had been questioned outside on a domestic violence call tussled with a police officer who tried to enter the man’s home.

A 3-2 majority agreed that the man didn’t have the right to stop the officer from entering. According to the written opinion, allowing people to resist police could promote violence, even if police enter homes unlawfully.

The cop had no right to enter that home without a warrant. He could have detained the man for a time without pressing charges and gotten a warrant. I italicized a part of the story I want you to see, resisting police could cause violence, even if they have no warrant, so its best to roll over. So much for civil liberties, its time to learn our place in the pecking order, not citizens, but subjects. Well, I don’t roll over and neither did a number of Indiana’s freedom lovers. They protested, and are working to get the Justice who wrote that opinion kicked off the bench. I love protest, it makes me feel better about humanity.

Here’s a question, cops know they need a warrant, so why did he enter the home without one? If this happened to me I’d jump on a phone to the ACLU. I used to hate them, and they are a bit hypocritical when it comes the the 2nd Amendment, but I see where they are useful in keeping tyrants in check. I don’t know what the Justice’s reasoning was but if he had rubbed two brain cells together, he could have come to the same conclusion I did. I hope he’s disbarred, and the officer investigated. Society mistrusts cops generally and this isn’t helping their case, its making the good cops look bad. A lot of people don’t judge individually, they do it broadly.