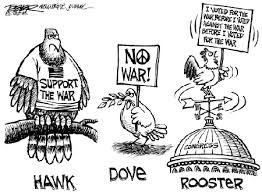 Last week Senator Rand Paul brought a non-binding amendment to the Senate to challenge the President’s authority to send troops to war in Libya. In 1973 Congress passed the War Powers Act where Congress did what it does best…pass the buck, and the blame.
What’s the War Powers?
A president can deploy troops for up to 60 days without Congressional approval IF the country is in imminent danger. A good idea that has been abused to the max. Congress is slow, and that has it’s advantages. But you can’t debate whether your going to block the punch, or throw a hook, or maybe a jab, either. The last declared war was WWII, since then it’s “kinetic operations” in today’s PC speech.
Libya isn’t a threat to us, and it’s a UN operation that we got involved in, essentially making us the UN’s attack dog this go around. Carl Levin, a Michigan Democrat complained that many military actions the last 30 years would not meet Sen. Paul’s standard, like Reagan going into Grenada. I think that was the point Carl.
They called for a vote to declare Obama’s actions as constitutional, and 90 Senators, including my own, supported war with Libya. Yeah, hope and change and all that. I see your true colors you swine, no matter what party you hide behind. No wonder I’m a pissed off Independent wolf.

2 thoughts on “The Senate takes a stand on Libya, and crumpled at the knees”